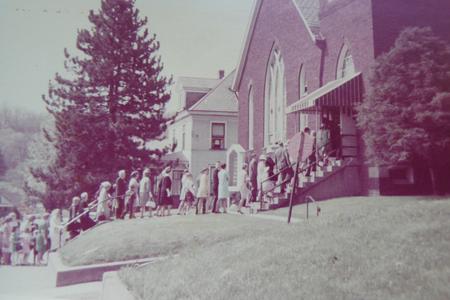 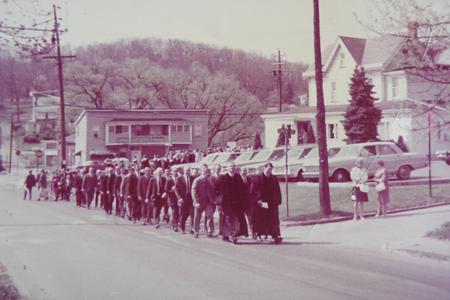 The United Presbyterian Church of North America is built where we currently worship.  Its congregation is almost exclusively Scottish and Scots-Irish and comprised of many farmers and workers.

The Presbyterian Church in the USA, with its English roots, is built on the town green and finds many merchants and owners in its pews.

Differences between the two congregations obscure over the decades, adn when the two national denominations merge, so do the congregations in Mars.  Members from both churches join together as they enter the Crowe Ave. building as seen in the image.  Now they are truly a united church, appropriate to their new name, Mars United Presbyterian Church (or affectionately called MUP).

Rev. Robert B. McCrumb II (or "RB") is called to serve as the pastor of MUP.
He brings with him many programs that are still a part of the church today, especially the fellowship stemming out of the church kitchen.

Major renovations are made to the present sanctuary including the woodwork, pulpit and pipe organ.

The Eshbaugh house is purchased to use as the church office.

The rear addition is made to the church building, providing greatly needed space for Sunday School classrooms.

Rev. McCrumb retires as pastor of MUP and is appointed Pastor Emeritus in recognition of his long and faithful leadership in the church.

Sean Brubaker is hired as full-time Director of Youth to serve the growing needs of MUP's younger congregation.

MUP celebrates 120 years of ministry!  A celebration dinner is held, the sanctuary lights are left on as a reminder of the work the church does in the community.  Various other activities are planned during the year to celebrate the anniversary.


MUP continues to grow and serve the community of Mars, looking forward to what the future holds!